I wanted to pass along a lesson I learned this week.

I turned on my sewing machine on Sunday afternoon and realized, after the initial calibration it normally does, the needle did not go to the center position.  I thought that was strange.  I tried a couple of other stitches, turned the machine on and off, still the same situation.  It did a straight stitch okay and I could move the needle position to the correct 1/4" I needed... but that's not right!  I tried a buttonhole stitch and you can see the result above - Yikes!  It seemed that all the stitches were corrupted.  I was so upset.  My baby was sick!

I talked to my machine dealer on Monday and while they suggested I need to have the machine serviced (which I agree!), they didn't offer much in the way of a solution.  Other than, as I said, bringing the machine to them, leaving it for a couple of weeks, and hope the repair didn't bankrupt me!  However, they did say that maybe the 'sensors' had dust in them, but that wasn't something I could get to or do myself.  Apparently the 'sensors' regulate the needle position.
Interesting....

So I gave the machine a good cleaning, which I do periodically - but lint builds up so quickly.  Cleaned out the bobbin case, the entire bobbin area and any crevices I could get my cleaning tool into.  I tried to blow any dust or thread particles out of the tension disks (even though you can't access them on my Viking) as best I could.

I turned the machine back on and viola' !!!!!  The needle went to the center position!  I controlled my excitement until I tried the buttonhole stitch and it worked perfectly!!!  I was so excited!!  I had my machine back!
So lesson learned......  keep your machine as free of lint and thread as possible.. and clean it often!

Please feel free to comment - I would love to hear your thoughts! I will try my best to reply however, if you are a No Reply Blogger I will not be able to comment. If you would like, please include your email address so I can reply. Thanks! Look forward to hearing from you! 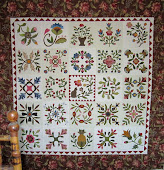 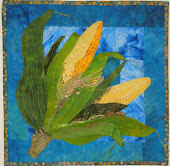 Goddess of the Deep 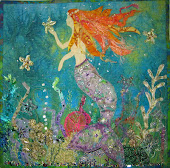 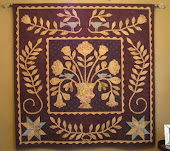 Debra
I am an art quilter and blogger who also loves traditional and modern quilts. I try to stitch every day - It is what keeps me sane!